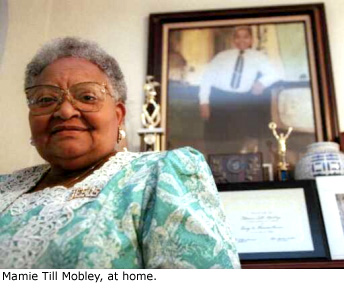 The next #QUEKnowYourHistory moment is on Mamie Carthan who was born on November 23, 1921, in a small town near Webb, Mississippi, the only child of John and Alma Carthan. Ironically, she was born just two miles from the town of Sumner, where the trial of her son’s killers would one day be held. Her father wanted to leave the South and the cotton fields, and made plans soon after his daughter was born. He found work in the small industrial town of Argo, Illinois, near Chicago, at the Argo Corn Products Refining Company.
When she turned 18, she met a fellow from Madrid, Missouri named Louis Till. He worked at the Argo Corn Company, was an amateur boxer, and was popular with many women. But Louis Till had his eye on Mamie. When they met, he took her to an ice cream parlor for her first banana split. Her parents disapproved, thinking the charismatic Till was “too sophisticated” for their daughter. At her mother’s insistence, she broke off their courtship. But the persistent Till won Mamie’s heart, and they married on October 14, 1940. Both were 18 years old.
Nine months later, their only child, Emmett Louis Till, nicknamed “Bobo,” was born at Cook County Hospital in Chicago. The boy was the apple of his mother and grandmother’s eyes. Aside from a bout with polio at age five, after which Emmett would speak with a mild stutter, he was a healthy and happy boy.
Emmett would never know his father, who was shipped out to Europe as an Army private. Mamie and Louis Till separated in 1942. Three years later, Mamie received a letter from the Department of Defense informing her, without a full explanation, that Till was killed in Italy due to “willful misconduct.”
By the early 1950s, Mamie and Emmett had moved to Chicago’s South Side. Both of her parents had remarried and left Argo, her mother to Chicago and her father to Detroit. Mamie met and married Gene “Pink” Bradley, but they divorced two years later.
When her boy was killed, Mamie turned to the strength of her family and faith. “When I began to make the announcement that Emmett had been found and how he was found, the whole house began to scream and to cry. And that’s when I realized that this was a load that I was going to have to carry. I wouldn’t get any help carrying this load.”
Horrified by the mutilation of her son’s body yet determined that it would not happen again, Mamie made a stunning decision — Emmett would have an open casket funeral. “I think everybody needed to know what had happened to Emmett Till,” she said. Some 50,000 people streamed in to view Emmett’s corpse in Chicago, with many people leaving in tears or fainting at the sight and smell of the body. After two of her son’s killers, J.W. Milam and Roy Bryant, were acquitted of murder, the Till case became an international cause célèbre with news articles and editorials across the country and in Europe condemning the verdict and Mississippi. The U.S. Army had executed Private Till in Italy in 1945 for raping two Italian women and killing a third. The insinuation: Emmett’s behavior ran in the family. On November 9, 1955, a Mississippi grand jury refused to indict Milam and Bryant on kidnapping charges. Both men were free. Mamie turned to the federal government for help, to no avail. She had not received her ex-husband’s Army records, and she asked how a senator, but not a widow, receive that information? Thousands of letters protesting the Mississippi verdict poured into the White House. Mamie took her fight to the people and gave speeches to overflowing crowds across the country. Blacks were galvanized. Membership in the NAACP soared. African-Americans were angered by Emmett’s killing and the injustice, and moved by the loss of an only child to a young mother. Those in the trenches of the civil rights movement realized they had to move their fight boldly to the front lines. In December 1955, Rosa Parks refused to give up her seat to a white passenger on a Montgomery city bus and was arrested for violating Alabama’s bus segregation laws. Soon after, a 26-year-old minister, Martin Luther King Jr., called for a city-wide bus boycott. The civil rights movement was officially born. More than thirty years passed before Emmett Till’s story would find renewed national interest, becoming the subject of scholarly research and publication. Filmmaker Stanley Nelson interviewed Mamie, other family members, journalists, and eyewitnesses who remembered what had happened in Mississippi so long ago, and by 2002, Mamie was working on her own memoir. But in a sad turn of events, just two weeks before the national television premiere of The Murder of Emmett Till, Mamie Till Mobley died of heart failure in a Chicago hospital on January 6, 2003. She was 81 years old.

To see all the #QUEKnowYourHistory moments go to my FB page www.facebook.com/Que274 and hit the LIKE button 🙂