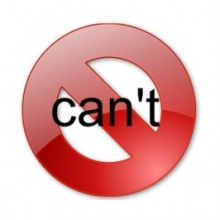 Quit Using Can’t. Today my youngest son brought home his Interim Report. He had ONE “B” and the rest ‘A’s. He did it, well almost. I asked him could he bring the ‘B’ up to an ‘A’ by Report Card time, and he said ” I believe so, I’m gonna try”. That’s what I wanna hear. He went from not believing that he would get A/B Honor Roll this year to now working hard as he can to get straight ‘A’ Honor Roll. Don’t accept mediocre work from your children push them to push themselves. If we don’t push them but accept what they decide to give, we’re letting them down and we’re standing by allowing them to let themselves down. Quit Using I can’t, Quit Using it’s too hard, instead TRY. Quit Using Excuses do your best, you just may surprise yourself. He’s surprised himself. In August of 2012 he prepared himself for a horrible school year. A school year full of disappointments believing he wouldn’t be able to deliver what I was challenging him to deliver. In his attempt to at least meet my challenge he exceeded my challenge and his expectations. Now he’s grinning from East to West and MOTIVATED to CHALLENGE HIMSELF TO DO EVEN BETTER. Now I’m grinning from East to West, Ear to Ear 🙂 Always push forward to do better you just may totally shock your system. He’s completing his last year of Middle School with a bang. Looking forward to what else he’s going to achieve in this life.